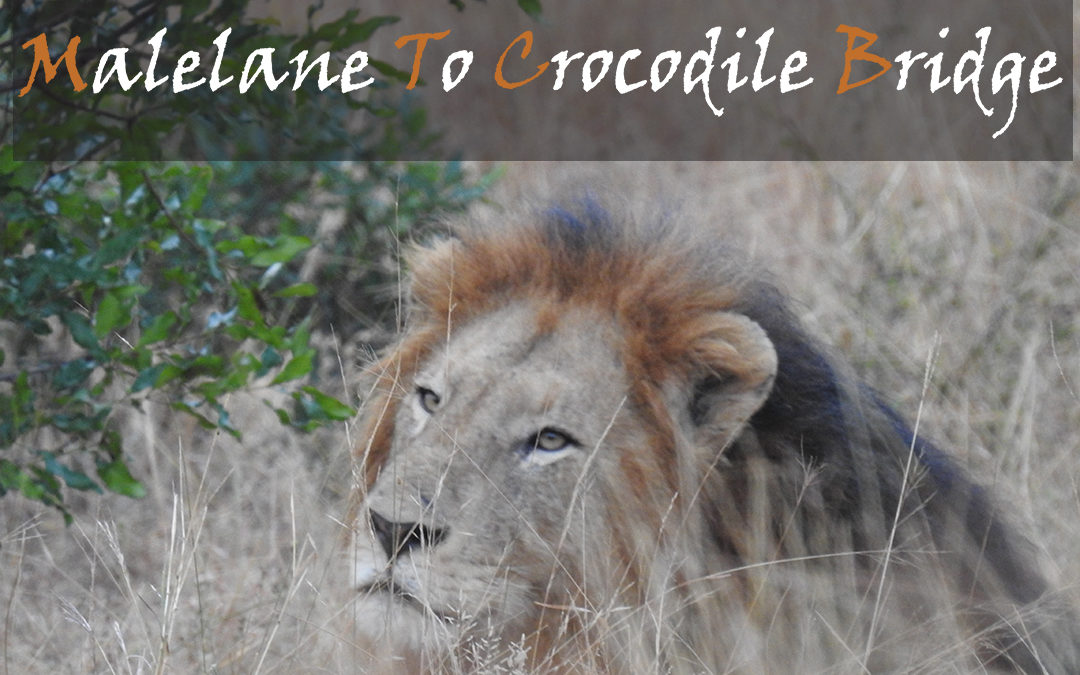 Malelane Gate To Crocodile Bridge Camp | Stories Of The Kruger

Our Annual Anniversary Trip To The Kruger National Park

Since Aimee and I were married, we have made it our mission to visit the Kruger National Park every year on our anniversary. It is our place of peace, love and happiness, and a place where I almost proposed to Aimee, at Nkumbe Lookout Point.

Now to the trip report…

We had a few hours sleep on the Thursday night and were set to leave at midnight, en route to Malelane Gate. We tend to leave at this time so we can get to the gates at opening times, and have the best part of the morning for game viewing and bird watching. We arrived after what felt like forever at 4.55am. We were the first car at Malelane Gate, not surprisingly as the gate only opened at 6am (It was May 2019). We were set to drive from Malelane Gate to Crocodile Bridge camp, via Skukuza, on the tar roads. This would allow us to visit some of our favourite parts of the Kruger National Park – Lake Panic Bird Hide and Sunset Dam.

We waited for the gates to open patiently, and we listened to what remained of the night sounds, which included bats and some very vocal Hippo’s in the Crocodile River, which was strange as I thought they would still be foraging at this time, it must have been a good night, full of grass!

As the gates opened, we checked in and were off. We headed to Afsaal down the H3, an excellent early morning road and route. We saw Impala in a wet morning that started off at 11 degrees Celsius. The rain lasted for a while and we then encountered a Spotted Hyaena running down the road, almost in panic mode. We love Hyaena’s and watching this one for a few minutes was a treat until it disappeared into the bush on the left hand side of the vehicle.

The H3 is very quickly becoming one of our go-to Big Cat roads, as we have seen Cheetah, Lion and Leopard fairly often in the early morning and late afternoon. We weren’t disappointed. After two incidents of Slender Mongoose running across the road, we stopped and watched a beautiful dark-maned male Lion. This Lion was in beautiful condition, but it was a photographer’s nightmare! This male Lion had, what seemed like any way, to have strategically placed himself in long tawny coloured dry grass. How many Lion sightings happen like this? We weren’t complaining though, even though we managed to get a few poor photos, we were ecstatic to get to spend time with this stunning male Lion.

On the way to Afsaal we managed to see more Impala (It was the rutting season, so competition for territory was of utmost importance) and Warthog as well as numerous common bushveld birds such as; Cape Turtle Dove, Egyptian Goose, Natal Spurfowl, African Jacana, Magpie Shrike, Cape Glossy Starling, Dark-capped Bulbul, Fork-tailed Drongo, Laughing Dove, Arrowmarked Babbler and Red-billed Oxpecker.

We then stopped at a very quiet Afsaal for a toilet break and some much needed coffee. 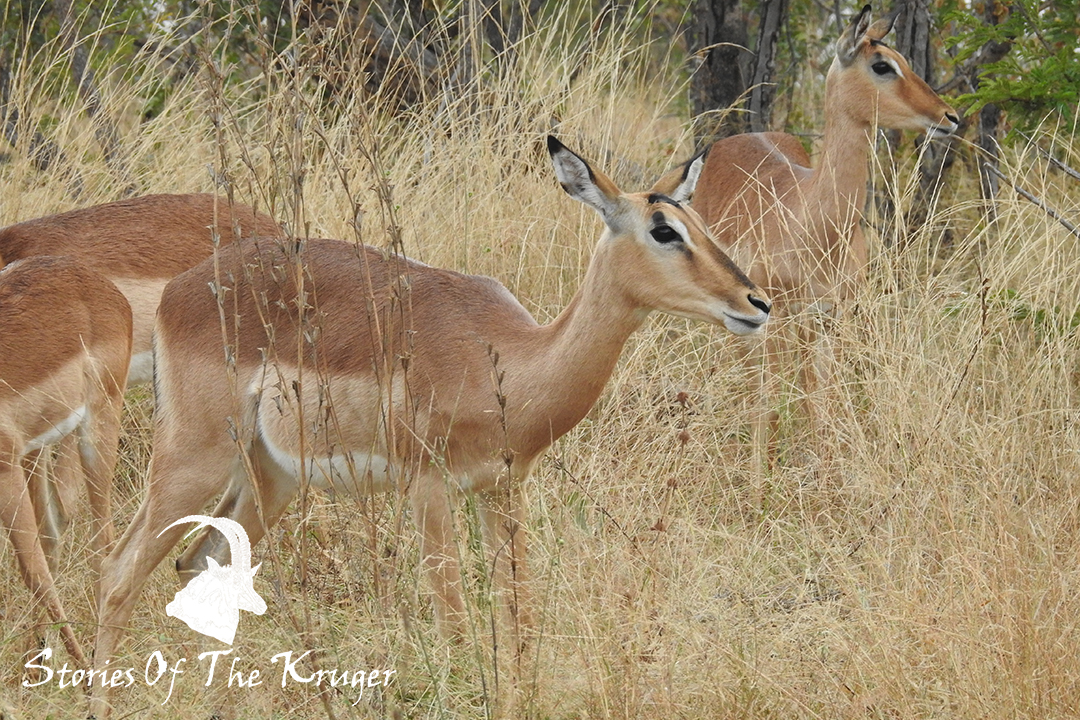 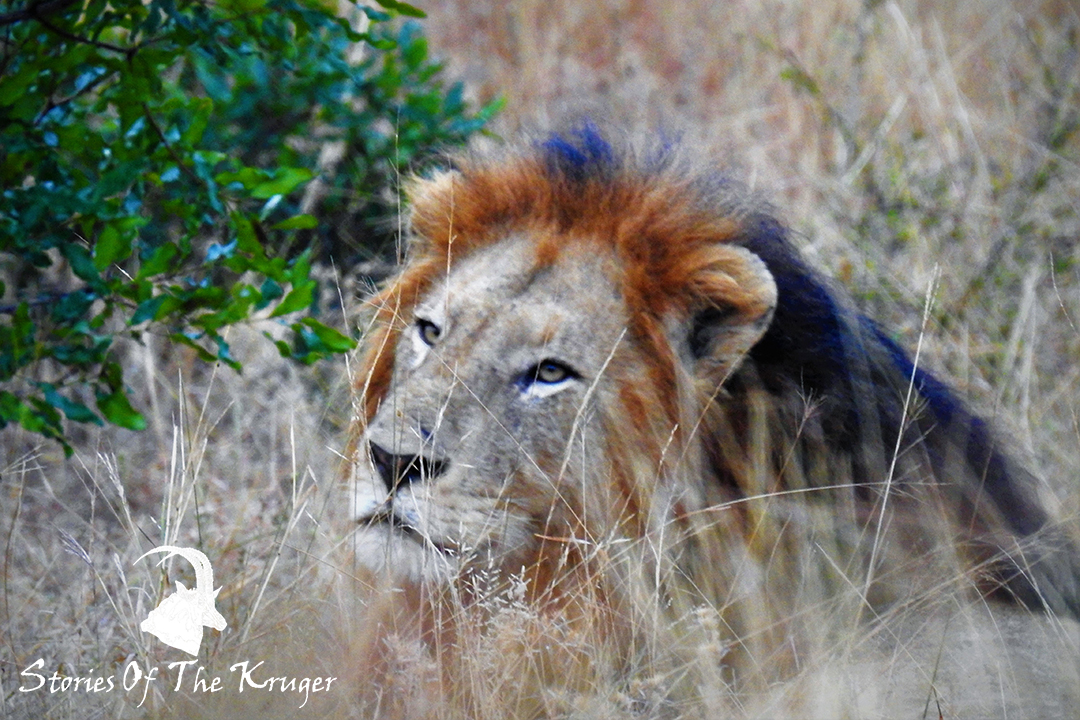 The next part of our journey was to take us to Skukuza, via Lake Panic Bird Hide… An amazing place, where one could spend hours and hours.

A few minutes after leaving Afsaal, we witnessed some attempting of hunting by a beautiful sub adult African Harrier Hawk (Gymonogene). The smaller birds were going crazy, alarm calling, mobbing and flying all over the place. We then encountered some Dwarf Mongoose, the first of 3 sightings we would have of Dwarf Mongoose on this route. They were warming up in the sun and playing, beautiful to watch. They would also make a good meal for the African Harrier Hawk seen a few kilometers prior. 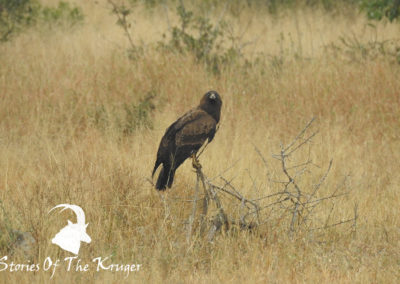 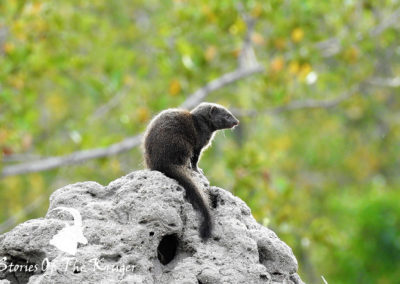 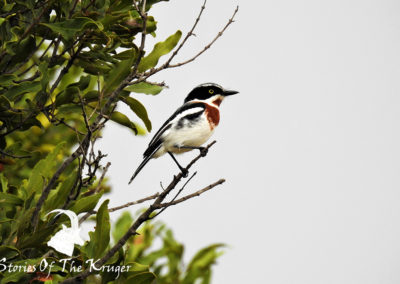 We arrived at a busy parking lot at Lake Panic. We managed to get a seat in this unbelievable bird hide and the action immediately started. The Hippo’s were in and out of the water, including one that was very close by. This included a baby Hippo playing around. There were some huge Nile Crocodiles on display and some big Sharptooth Catfish coming up (Barbel). Birdlife was prolific and entertaining. We witnessed a Pied Kingfisher eating a small Tilapia (Kurper), and birds such as Blacksmith Lapwing, Black Crake, African Jacana, White-breasted Cormorant and African Darter were hanging around. There was a pair of African Fish Eagle’s in the distance, and every now and then they would call, what a noise! We also had an unusual sighting of quite a few White-faced Ducks. There was a Pied Wagtail on a dead log, Crested Francolins in the thicket, White-backed Vultures circling and an Emerald Spotted Wood Dove drinking.

Out of nowhere, and very quietly, a small herd of Elephants came down to drink. This was our first Elephant sighting of the trip, and of course made Aimee very happy. We watched the Elephants move off and then it was our queue to leave. The Pied Kingfisher, African Darter and White-breasted Cormorant were all still there… As we left we saw a small herd of Nyala above the fence and a little Skink popped his head out from one of the wooden poles in the fence.

As we got to Skukuza, we parked, and Aimee got the fright of her life. There was a large Water Monitor in the drainage system and it was right next to the car, it hissed horribly at her and jumped in the water. 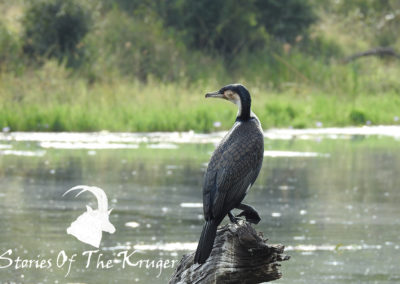 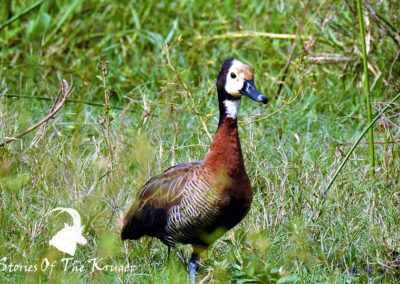 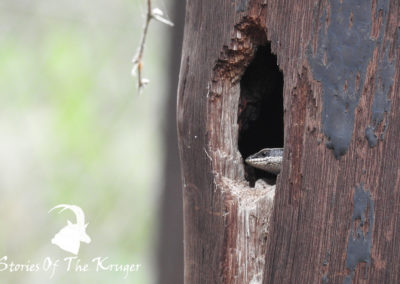 Malelane Gate To Crocodile Bridge On The H4 Via Sunset Dam

It was warming up, and the temperatures were getting close to 30 degrees, it was sitting at 29 degrees to be exact. We headed onto the H4-1, which then becomes the H4-2 after Lower Sabie, and started to see plenty of wildlife. Impala were plentiful, as they normally are on this route and we bumped into a huge breeding herd of African Elephants, more than a hundred! We got mock charged by one of the little ones in the herd…

We finally reached Sunset Dam, which was very active. The Crocodiles were hunting fish, the Hippo’s were rising up and down and there were quite a few Helmeted Terrapins. Some birds that we saw included Yellow-billed Stork, African Spoonbill, Black-winged Stilt, Helmeted Guineafowl, Grey Heron, Water Thick-knee, Cape Wagtail, Little Egret and White-rumped Swift. We spent about 30 minutes watching all the activity. This is a place where you can spend hours, similar to Lake Panic, and there always seem to be Impala around drinking. We also saw a few Zebra coming down for a drink.

We continued on our way to Crocodile Bridge and came across a huge troop of Chacma Baboons with a large male hanging around. As is the norm, we closed our windows and watched them… Impala continued to be abundant and we saw a few more Giraffe and Buffalo, as well as a Bateleur Eagle and a few Trumpeter Hornbill flying over us. I love these birds, and to this day I still not have managed to get a photo of them. Close to Crocodile Bridge, we had a pleasant surprise; a Harlequin Quail scurried across the road. These birds are very small, and easily overlooked. This one was too quick for a photograph unfortunately. 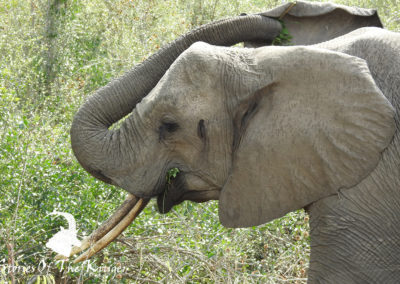 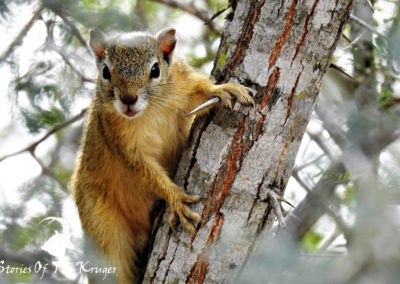 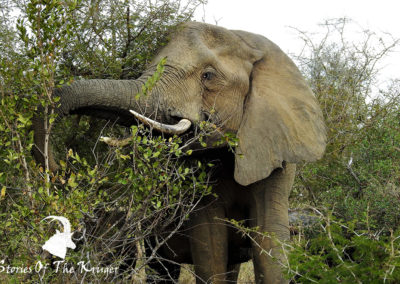 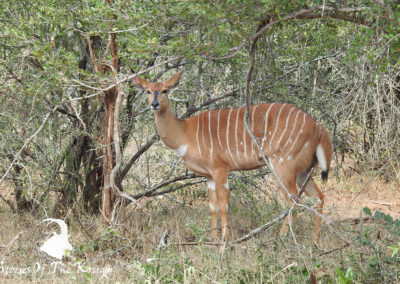 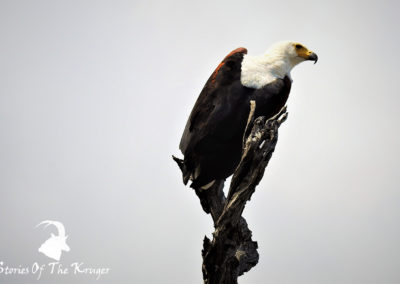 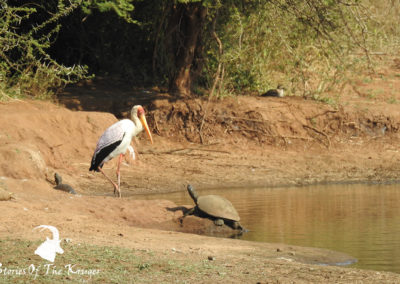 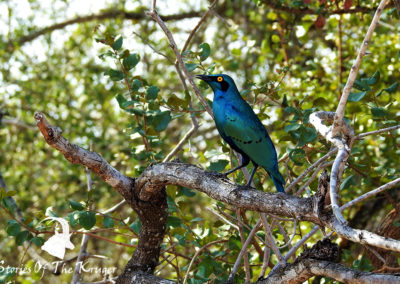 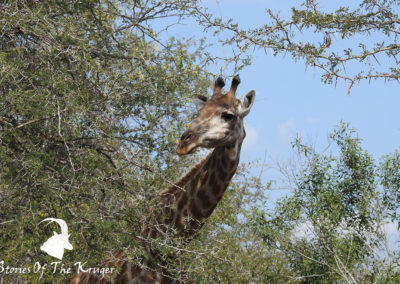 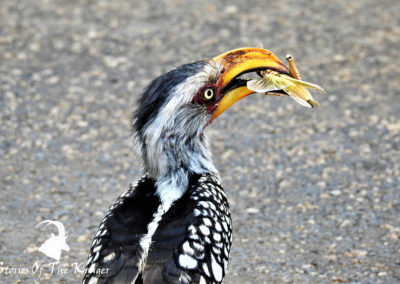 Malelane To Crocodile Bridge – We Had Arrived

After checking in to Crocodile Bridge we were very happy that we got a perimeter Safari Tent, number 8, which looked straight into the African bushveld. We could hear male Impala calling, once again due to the rutting season, and we had a Bushbuck inside the camp outside our tent, as well as a mother and young Bushbuck on the other side of the fence enjoying what their was to browse. After unpacking and cooling down, we decided to take a late evening drive to Hippo Pools. We saw Senegal Lapwing, Crowned Lapwing and our first Swainson’s Spurfowl of the trip. There were a lot of Elephants, Blue Wildebeest, Impala and Giraffe on the short route we drove. The sky was beautiful, and it ended what was a magical day in the Southern Kruger National Park. We were so blessed.

On top of all of that, we were delighted to have two very small visitors to our Safari Tent that night. They were back and forth and we saw them numerous times. The cute Lesser Bushbaby was the culprit! Now, on to day two! 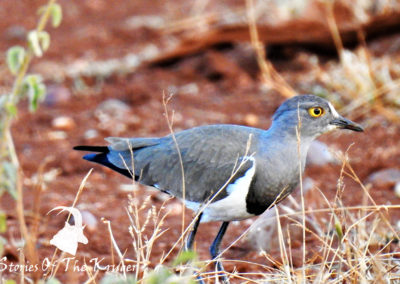 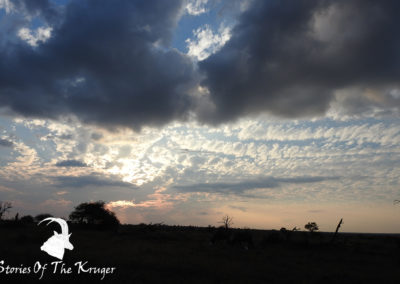