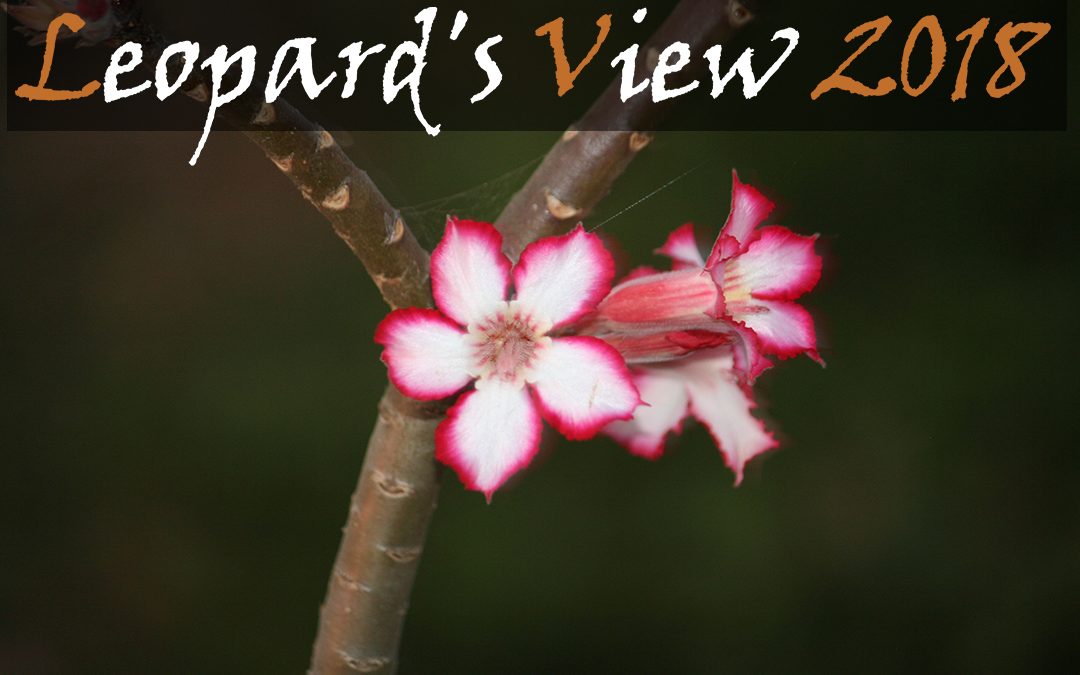 Leopards View is one of my favourite places in the Greater Kruger National Park. There is something really special about this lodge. The relaxation aspect really gives you that proper bushveld feel.

Aimee’s mom booked us a surprise trip for Christmas and we were so excited. We had visited Leopards View in August for the first time and fell in love with the place and the area.

The Trip To Leopards View

We left Edenvale at about 10pm after Boxing Day en-route to the Kruger Park. Our plan was to go in at Orpen and spend half the day in the Park before heading to Leopards View (Read the report here – we saw our first ever Honey Badger).

We eventually left the Park at around 2pm and took the short drive of about 45 minutes to the Balule Private Game Reserve. Leopards View is basically situated in-between Orpen and Phalaborwa.

We arrived, unpacked and had a few drinks under the boma as we watched the birds and Impala close off the day. Neil and Ann Kern are very accommodating and they lit a fire before dinner.

After a lovely dinner, we sat around the fire and listened to the sounds of the night. One of our favourite night sounds is the Scops Owl, and we could hear a pair calling the whole night. They called every night we were here. We also heard a Pearl-spotted Owlet and a Spotted Hyaena.

We called it an early night; we hadn’t slept for 30+ hours. Just before we went to sleep we saw a baby Scrub Hare come to drink, this was the second baby Scrub Hare we had seen here. 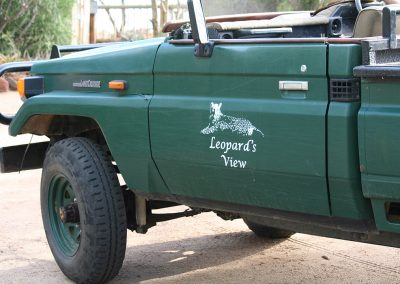 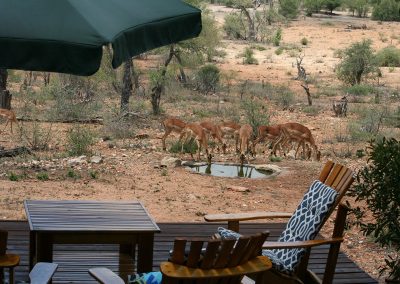 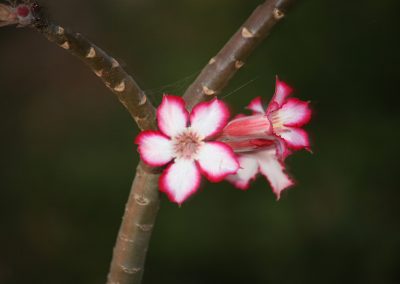 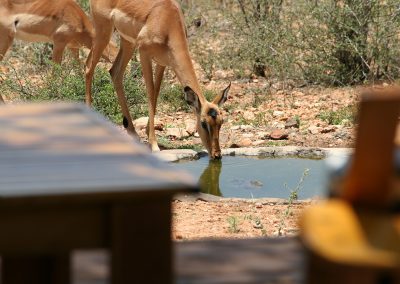 We were up early, as we always are in the bush. We heard the Chacma Baboons calling from the Olifants River and the Natal Spurfowl were frolicking around in front of the deck. The Arrowmarked Babblers were making a tremendous amount of noise too.

After an amazing breakfast the heat started to pick up. We sat under the fan in the boma and watched the Impala, Kudu and Burchell’s Zebra come and go. There was a lot of birdlife around, even though this was the worst drought since 1985. Walking around the camp I was able to get up real close to a Long-billed Crombec and also saw Black-backed Puffback

We went on a late afternoon drive and had a sundowner. During the drive we saw the colourful Giant Plated Lizard and a few Dwarf Mongoose amongst the game we had seen earlier. We saw a lot of birds including Wahlberg’s Eagle, Scops Owl, Sabota Lark, Blue Waxbill and a breeding pair of African Hawk Eagles, which was definitely the highlight of the drive for me.

We were woken an hour before sunrise by everyone’s favourite bush noise. Male Lions calling! We scanned the bush, climbed the tower, but alas no Lions to be seen. After an hour of beautiful noises, the Lions stopped calling. The birds were plentiful as usual with the Babblers making themselves known again. We also saw Green Woodhoopoes up close.

We had breakfast and sat down to relax. Five minutes later our first surprise presented itself. At about 10am a Lioness walked to the waterhole and started to drink. We were amazed and full of adrenaline, what a sighting. Sitting on comfortable couches watching one of the most iconic predators drink in 30-degree heat. The Lions were definitely in the area. We had the pleasure of watching and listening to the Foam Nest Frogs who had made their temporary homes in the Boma,

As the Lioness left we heard some soft calls and movement in the tree closest to the boma. Four African Barred Owlets! Two adults and two juveniles. They stayed with us until we left for a drive at 4pm. I took about 50 photo’s, I have never seen this species before and in the daylight (Really close) as well!

Walking around the camp yielded a lot of other interesting creatures. We watched a male Rainbow Skink devouring a Centipede on the deck, Dwarf Mongoose, Banded Mongoose, Warthog, Burchell’s Zebra, and Impala and Kudu (Both drinking from the bird pool). The Tree Squirrels were all over the place. Birds such as the Red-headed Weaver, Bar-throated Apalis, Scarlet-chested Sunbird, Southern Black Tit and Green-winged Pytilia.

Neil and Ann then got permission to take us to a private hide on the Olifants River, just a few kilometers from the Lodge. This was unbelievable. The amount of animal species we saw was incredible. Here are just a few of the animals we saw, including the Nile Crocodile: 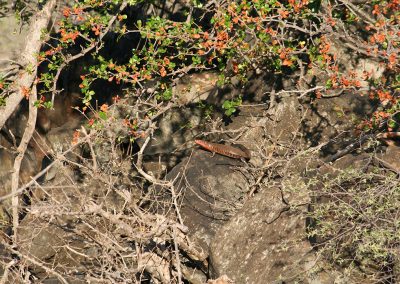 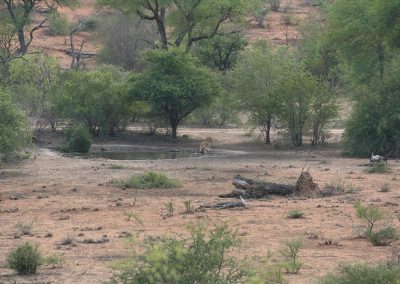 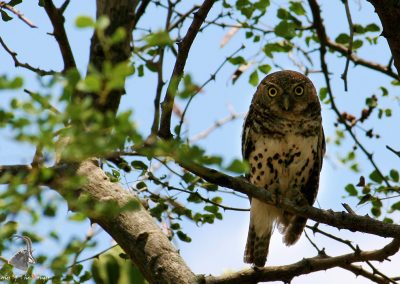 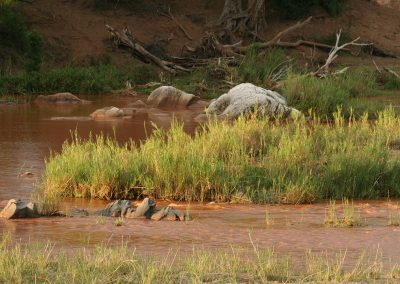 We were set to leave early the next morning (4am) towards Orpen Gate to spend another day in the Kruger Park and leave via Crocodile bridge – Read this report here.

This day was an amazing birding day, and I will try cover as many of the exciting species we saw on this day.

We then had breakfast and spent the rest of the day, it was New Years Eve and was around 40 degrees with 90% humidity, so we were in and out of the pool.

I don’t really know why the birdlife was so prolific in the heat that day. Some of the interesting birds seen were the Marico Sunbird, Yellow-breasted Apalis, Diederik Cuckoo, Wahlberg’s Eagle, African Barred Owlet, Golden-breasted Bunting, Alpine Swift, Golden-tailed Woodpecker, Crested Barbet, Eastern Black-headed Oriole and White-browed Robin-chat – just to name a few.

Besides the birds, we saw Giraffe drinking, a young Kudu bull who hangs around the lodge with an Impala herd (Probably for safety), warthog, and two Lesser Bushbabies that came out of the boma during midday!

Here you can download a PDF of all the birds we saw during our trip.

And that was that! Aimee and I cannot wait to go back. 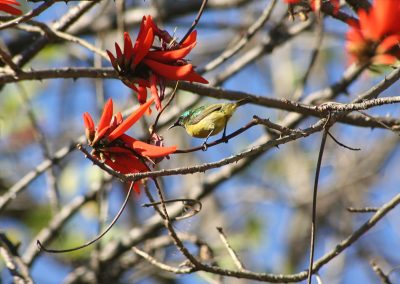 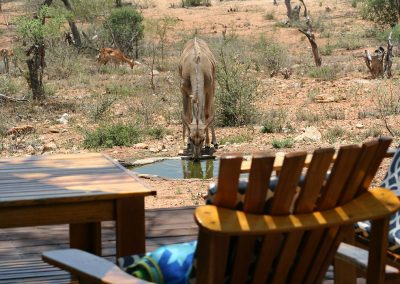 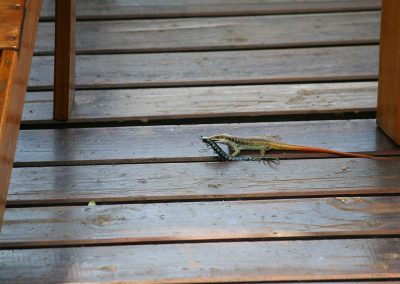 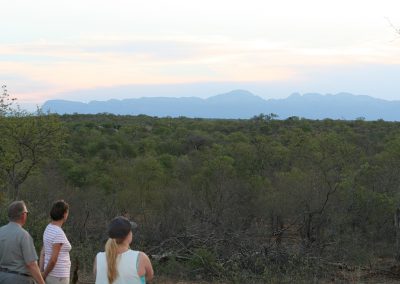