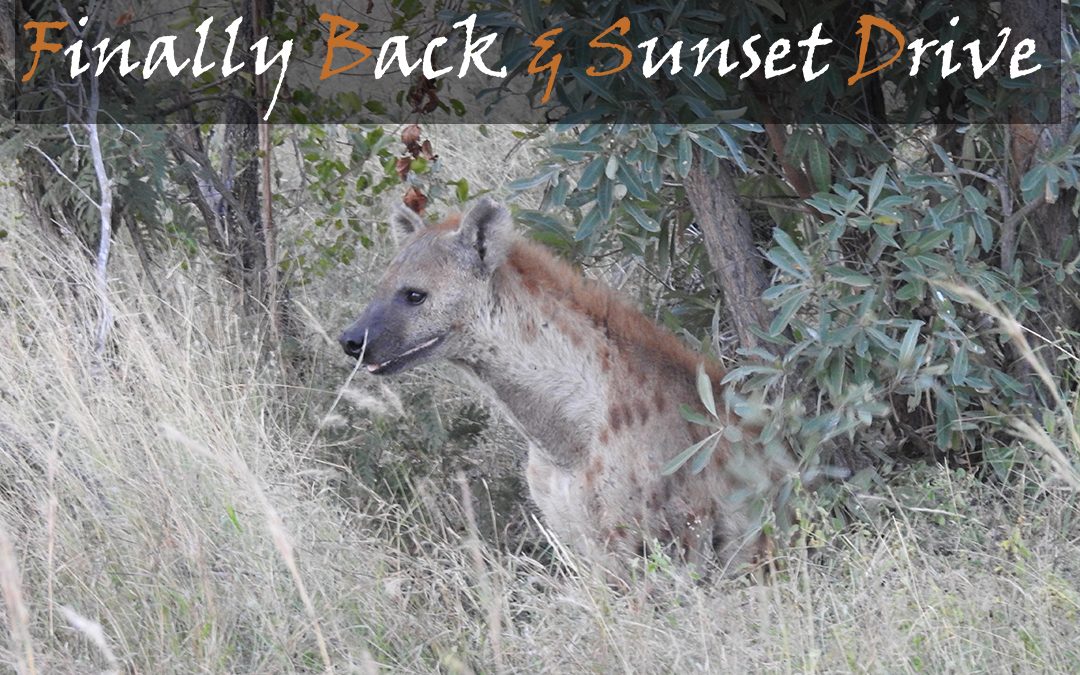 A Short Route & Then The Berg-en-dal Sunset Drive

We arrived at Berg-en-dal for our surprise first year anniversary trip (Read how the plan unfolded here) at around 2pm on Friday. We entered through the Malelane Gate. On the bridge we stopped for about 15 minutes, there was so much to see!

There were 3 Nile Crocodiles enjoying the mid 20 degree heat, a herd of Hippo’s out of the water and a school of Mozambique Tilapia sitting in the current right under the bridge. The bird life was prolific. There were Hadeda and Sacred Ibis feeding at the water’s edge, a Pied Kingfisher diving in and out of the Crocodile River in the distance, Egyptian Geese and Blacksmith Lapwing patrolling the banks, Barn Swallows foraging in flight and 20 or so White-backed Vultures using the thermals to their advantage and soaring above us! What a way to enter the Park, and we had not even driven through the gate yet.

We filled in all the paper work and took the short 14-kilometer drive to Berg-en-dal. As it was the middle of the day we did not see too much. The birds were resting, except a beautiful Tawny Eagle that perched perfectly for us to get some photographs of this magnificent raptor. 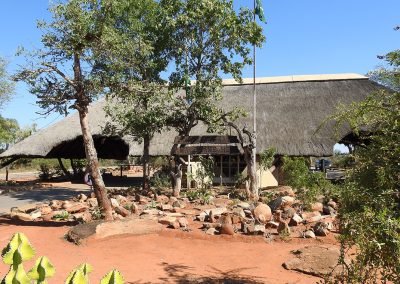 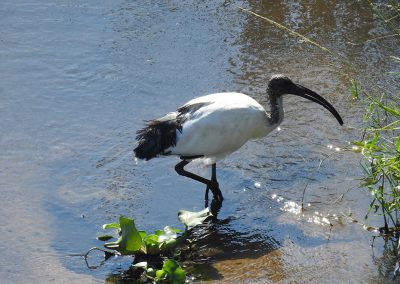 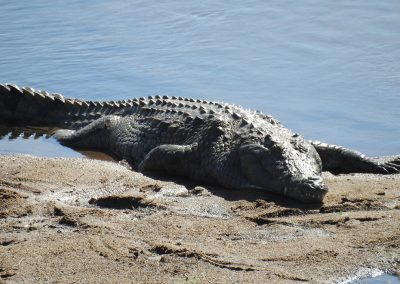 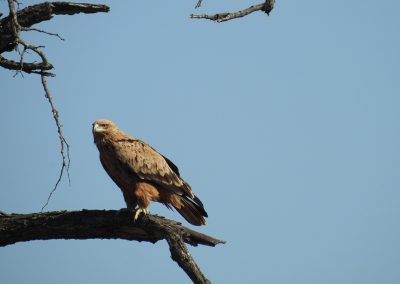 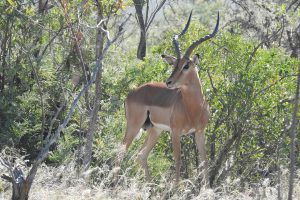 First Impala Of The Trip

On the rest of the short trip we managed to see a few Impala, Yellow-billed Hornbill, Lilac-breasted Roller, Arrow-marked Babblers, Laughing Dove, Fork-tailed Drongo, Red-billed Oxpeckers and a Yellow-throated Petronia…

We scanned the mountains for Grey Rhebok (Which would be a surprise sighting the following day, read more here) and Mountain Reedbuck. The area around Berg-en-dal is known for some of the smaller rare antelope in the Kruger National Park.

We checked into Berg-en-dal. It was 27 degrees, and we had a look around the Rhino museum in reception. Unit 15 was to be our home for the next 2 nights and we were greeted by Orange-tip Butterflies, Rainbow Skinks (Including one with no tail) and Dark-capped Bulbuls.

Before we unpacked, we went to the dam that can be seen from Berg-en-dal. There was all sorts of activity. The dam was very low, and dry in some parts. The baboons were all over the trees and the ground, it was a big troop. There was a lone male Bushbuck that did not seem to like the Baboons company, as it kept shunning them away. We watched a male and female Waterbuck drink while a Cattle Egret preened itself and the Egyptian Geese were making quite a racket. A flock of Trumpeter Hornbills came flying over as well.

We then watched a mother and juvenile Natal Spurfowl peck around the bungalow for a good 20 minutes. Then it was time for the exciting Sunset Drive I booked for us to make our anniversary trip that extra special. 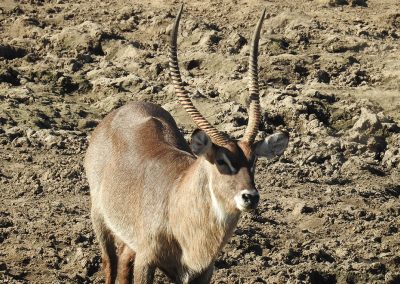 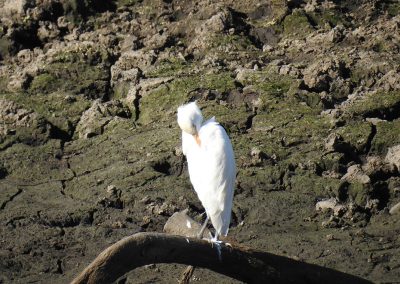 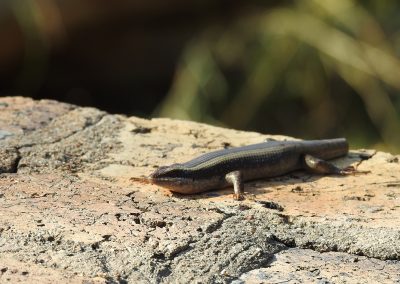 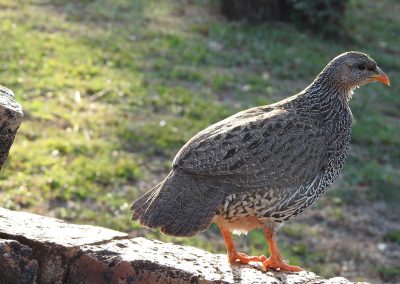 There were 10 of us on the Berg-en-dal Sunset drive, and we sat very comfortably on the big vehicle. Our guide, Dolphie, was very nice and she was extremely knowledgeable.

We left Berg-en-dal on the S110 tar road and almost immediately a huge male Warthog greeted us. He was close to his burrow, which was interesting to see.

A female Spotted Hyaena was close to her den in a culvert. She had a Hippo leg with her. Very interesting. She wasn’t feeding on it as yet. We were to see her later again on the way back, and have a fantastic sighting of her on our last day. It is great to find out where animals home’s are.

There were lots of Impala around and we managed to view 2 male Elephants and a small breeding herd before turning onto the H3. From the H3 we turned onto the gravel roads. We drove the S114 (Renosterkoppies Road) where we saw male rams fighting over female Impala, as it was the rutting season. Burchell’s Zebra were seen as well.

It was very quiet… We turned onto the S121, the Timfenheni Loop. We started seeing Spotted Thick-knee’s in the road as it was dark by then. There were a few Nightjars in the road, we think they were European Nightjars due to the white tips on their wings. Crowned Lapwings were also moving up and down the roads. We saw our first Scrub Hare, so we knew the nocturnal animals were out.

The Berg-en-dal sunset drive then became very quiet for 45 minutes or so. Only a solitary male Common Duiker decided to make a quick appearance. Some of the guests were getting a bit irritated, I could just tell, but Aimee and I were happy to just be out at night in the Kruger. The fresh air, the nighttime noises and the potential of seeing anything.

Back on the H3 we heard the Western Barn Owl calling quite close to the road, and then all of a sudden, next to the road… A male Lion! Wow! Everyone was extremely happy and we sat with him for about 25 minutes. He was quite thin and had very bad scars on his face. I am sure this was a lone male with no pride to look after. His light-coloured eyes were something to be mesmerized by. There is a video of the Lion, as well as the Hyaena we saw, on the right/below.

The Lion had us all pumping full of adrenaline. We saw him just before the Matjulu river bridge, approximately 5 kilometers before it. On the other side of the bridge we saw a Hippo walking through the thick bush very quickly. This was one of the biggest Hippo’s we had ever seen, and it must have come from the Matjulu waterhole or the Crocodile River, which means it had covered a great distance already.

Hippos are known to cover distances of 10 kilometers or more per night in search of good grazing areas.

We then turned back onto the S110 tar road, which is the main road to Berg-en-dal, and we saw more Elephants browsing alongside the road. At one Elephant sighting we saw, or should I say, Dolphie saw, a Flap-necked Chameleon, blended beautifully on a Red Bushwillow. I then wondered to myself, had an Elephant ever eaten a Chameleon by accident? A mystery of nature for sure.

Our final sighting was when we came up on the Hyaena den again. This time we saw her feeding 10 meters or so away from the road. We could hear the cracking of the bones in the Hippo foot as she fed. It was amazing. Their jaws are some of the strongest in the World.

We then entered Berg-en-dal, and the sunset drive was over. What an experience, we were so happy! The Tindlovu restaurant was our next stop before retiring for the night. We had a wonderful dinner and then headed back to our chalet. Before bed we heard a lot of Vesper Bats flying around above us, a myriad of insect species, and the Pearl-spotted Owlet calling.

The last visitor we heard before entering the bungalow, it made me stop as it always does, was the beautiful call of the Scops Owl. What a day! We have a video below of the night drive experience…

Listed below are all the species we saw on Day 1: 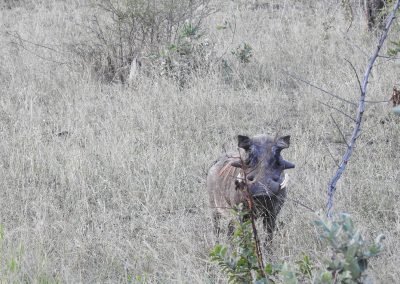 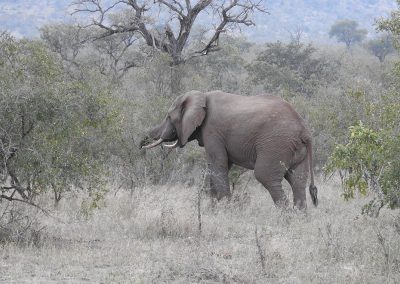 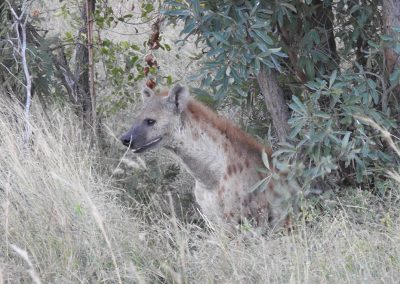 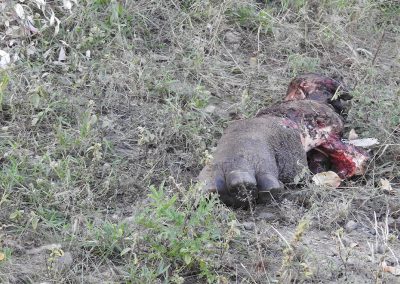