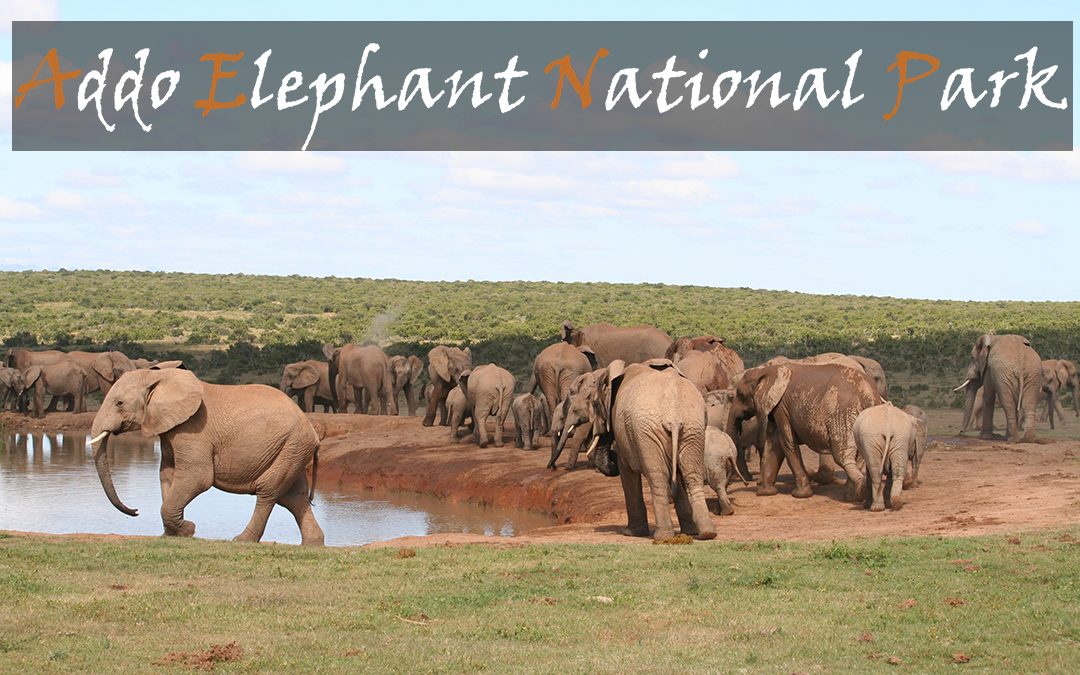 A Brief History On The Addo Elephant National Park 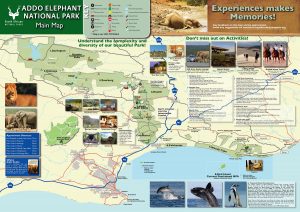 The Addo was proclaimed a National Park in 1931, to protect the remaining 11 African Elephants found in the region. The Elephant herds had been decimated by big game hunters and farmers, especially during 1919 and 1920, where at least 110 Elephants were shot. The wildlife in the area was in a poor state of affairs when the Park was proclaimed and it took many years to get to where we are now. There are thousands of wild animals, which include 600+ African Elephants.

To do counts and protect the Elephants in the early days, people would draw them out of the thick Addo Albany vegetation and Spekboom by using citrus fruits. People were banned to bring Citrus fruits into Addo for a long time after that, in case the Elephants caught a whiff of a distant memory.

There have been 2 major influencers, in terms of animals, that have added to the exciting legacy of the Addo Elephant National Park. They both have waterholes named after them.

The first creature was a Leopard Tortoise who got the name Domkrag (Jack in Afrikaans – referring to a car jack), as he used to enjoy, and obviously have fun, walking underneath cars and lifting them up with his head. Although this seems like a myth, this huge Leopard Tortoise did indeed use his jack like neck to lift cars into the air, quite remarkable. His death was untimely, and he fell into an Aardvark burrow and could not get out or turn himself over. His huge shell can be seen at the main Addo Rest Camp.

The legendary Hapoor is the second animal. This huge bull African Elephant got his Afrikaans name from a whole in his ear, believed to have come from a hunters rifle. This and the fact that he really hated humans makes a lot of sense. He was the dominant male Elephant in the Addo for more than 20 years until a few younger bulls finally took over from him and asserted their dominance. Hapoor eventually escaped the “Elephant-proof” fence in the late 1960’s, and due to his aggressive behavior, he had to be shot. His life-size head can be found in the restaurant in the main Addo Camp.

Due to the huge range of diverse environments, wildlife abounds and there are so many species of mammals, birds, fish, reptiles, insects, arachnids, amphibians and more! Addo is also home to South Africa’s “Big 7”, which include:

These animals can be seen through the various sections of the Addo. The 400+ bird species include coastal and inland rarities, as well as more common birds found within the Addo Elephant National Park like The Pale Chanting Goshawk, Steppe Buzzard and Bokmakierie. A full bird checklist can be obtained from the SANPARKS website by clicking this link.

There is some interesting information of the animals in the Addo Elephant National Park.

The 400 or so Cape Buffalo that occur within the Addo Elephant National Park, are the largest number of disease free Buffalo in Southern Africa. They get relocated every so often to other reserves around the Country, when their number peak. They used to be strictly nocturnal due to habits of old to avoid hunting. This all changed in the early 2000’s when Lions and Spotted Hyaena were introduced. They can now be seen out of the thickets during the day time, and the horns on some of these Buffalo are massive. 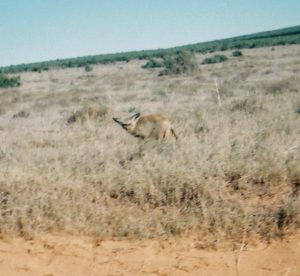 The more common animals are Warthog, Kudu, Red Hartebeest, Bushbuck and Eland (In the main section of the Addo Elephant National Park). In other sections you can find Black Wildebeest, Gemsbok, Springbok and a variety of other predators like the Brown Hyaena, Black-backed Jackal and Cape Fox.

Addo was the place where I saw many firsts. Growing up as a child we used to visit the coast town of Kenton-on-sea every year, about an hours drive from Addo. We managed to see Bat-eared Fox in broad daylight (I have an old digital photo that I have added here on the left), Black Rhino, Eland, Denham’s Bustard, Spotted Eagle Owl, Springhare and a variety of other animals that were all firsts for me.

The Addo Elephant National Park is a very special place, and is a must visit when in the Eastern Cape. Do not forget to visit Hapoor Dam from 11am to 2pm, you can often see herds of Elephants come together and drink here numbering in their hundreds, and Domkrag Dam can often produce Lion and Blue Crane sightings.

Some Photographs From The Addo Elephant National Park 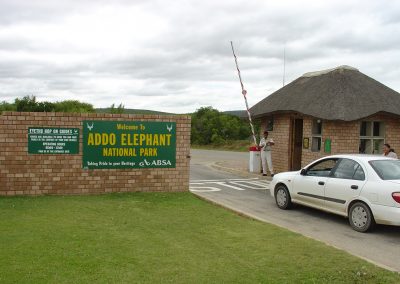 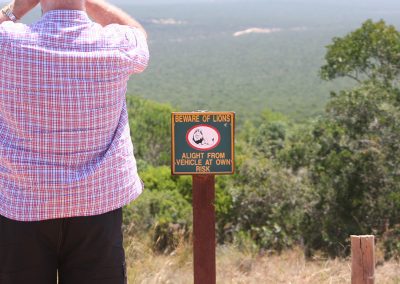 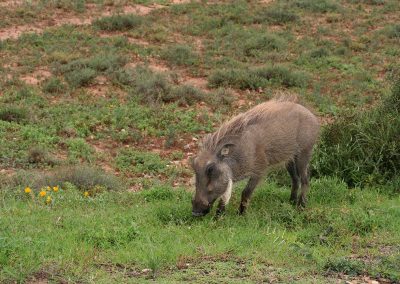 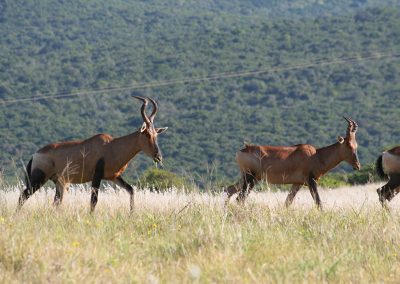 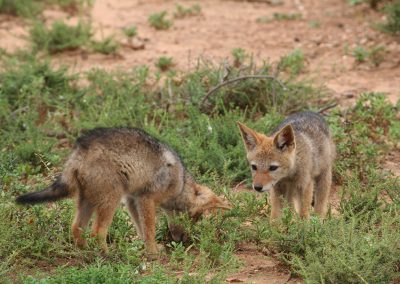 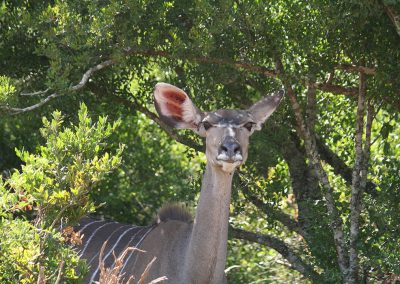 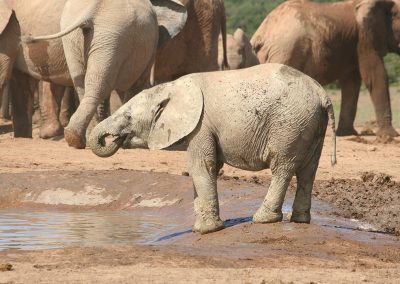 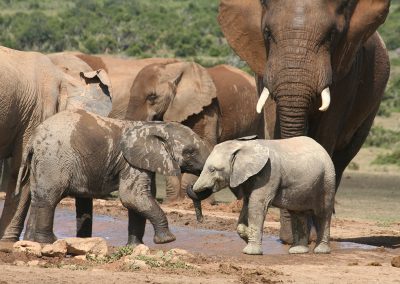 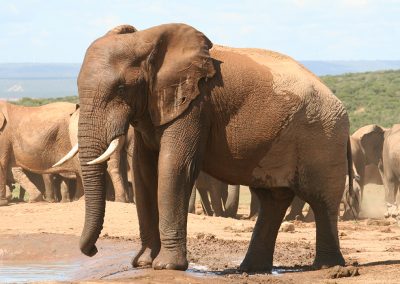 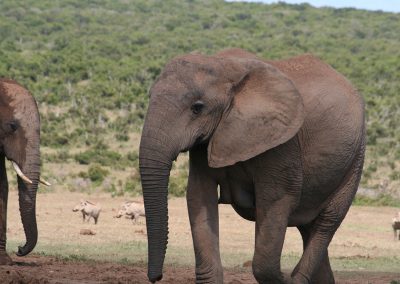 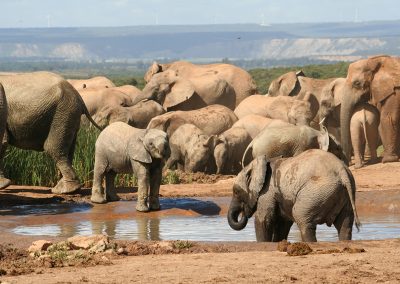 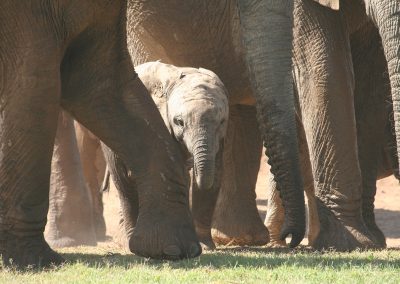